The generator tools in the calculus toolbox use a single JSON file, which holds the full description of a display calculus, to generate all the Isabelle and Scala code. The JSON format was chosen because it is simple to use as has parsers in many languages, including Python and Scala. Using JSON files also allows storing data easily and passing data between different systems/languages. In Python, which is used for all the code generation, importing a JSON file is a one line command:

A valid calculus description file is a JSON file with these four basic key-value pairs, the structure of which is documented below:

The value for calc_name is a string that holds the name of the calculus as it will appear in all Isabelle theories and Scala classes.

This section encodes the terms of the calculus, defined in Isabelle through the datatype definition. The encoding of a type and its terms in Isabelle is transformed into the JSON file in the following way:

The generic datatype definition above is ‘disassembled’ into the JSON file below.

Note that none of the nested parameters (type, isabelle, ascii, etc.) are not compulsory and can be omitted. Further details on the parameters used by the calculus toolbox generator tools are detailed here:

All the rules of the calculus are encoded in this section of the JSON file. The rules are split up into categories both for organizational purposes and for Isabelle performance reasons (the Isabelle datatype declaration for data types with a lot of constructors take a very long time to compile). The groups for the minimal calculus, for example, include nullary (or zero-ary) and unary rule groups:

The rules themselves are encoded in the following format:

The encoding of the rules themselves (i.e. not just the rule name and LaTeX labels, etc.) is contained within the rules section of the JSON file. The rules follow the same format and must be grouped in the same groups as they were defined in the calc_structure_rules section:

Instead of a dictionary, Id now has a list of Strings as its value. This list contains the ASCII encodings of the conclusion, followed by the rule premises. As mentioned in the intorduction, the $\rightarrow_L$ rule

has the corresponding JSON encoding:

Since proof trees are first class citizens in the DE, the inductive set definition for rules can no longer be used and explicit functions for matching sequents to rules and deriving new sequents through rule application are now defined. As detailed in the Calculi section, the match and replace/replaceAll functions match sequents with free variables (rules) to sequents that contain no free variables (concrete terms).

The application of a rule thus roughly becomes:

The these steps are encoded in several separate functions that compose to create the full mechanism for sequent derivation (the der function). The rules are (roughly) encoded as pairs of sequents (conclusion) and a list of sequents (premises) in a rule function, which, given a rule will return the pair of sequents.
The der function checks the given rule conclusion is applicable to the given sequent and if it is, it will derive the premises for that sequent.

While all rules follow this general pattern, some rules, like the Cut or Swapout rules in the D.EAK calculus, will introduce some of the following restrictions/modifications to the general pattern:

To give these special cases in context, here are three rules which require one (or more) of these deviations from the usual pattern.

The first special rule we consider is the atom rule (formal definition given on p. 38 of the Frittella, Greco, Kurz, et al. paper on the D.EAK calculus):

Next, we introduce the structural rules which are to capture the specific behaviour of epistemic actions

Since this rule cannot successfully be matched to any sequent except for ?SX ⊢ ?SY, because $\Gamma$ and $\Delta$ can have arbitrary shape and be arbitrarily long, we need an extra precondition which can check that the given sequent is of the correct form. We can do this by defining a function atom, which recursively unfolds the structure until it either reaches $p \vdash p$ or returns false because the sequent is not of the right form:

Finally the rule itself is encoded in the following way:

This may look a bit complicated at first, but to allow for a flexible enough encoding of all the rules, some redundancy may be introduced.

For example, the code after ⟹RD, namely (λx. Some []) may seem redundant, but the reason for this encoding will perhaps be more apparent in the section on the Swapout rule.

In the rule above, the formula $A$ no longer features in the conclusion. This fact makes proof search and derivation problematic, because while with most rules, we simply rearrange the sub-structures of a sequent (or add constants), in the cut rule, information is lost/needs to be added, depending on which direction one goes in (from from premises to conclusion or conclusion to premises). Since we go from conclusion to premises, we need to supply this information to the rule somehow.
This is where a locale comes in. A locale in the DE is a data type carrying some extra information which may be required for a successful application of a rule. In the case of the cut rule, the encoding of the rule is the following:

It should be fairly obvious to see that the cut rule can only be applied if the formula f is given.

The swap-out rules are different to the other rules of the D.EAK calculus in that they are parametric in the given sequent (conclusion) and the $\alpha \texttt{a} \beta$ relation, as described on p. 39 of the aforementioned paper on D.EAK:

The rule $swap\text{-}out’_R$ given above has been formalized in Isabelle in the following way:

The first part of this rule (the conclusion) looks like any other rule, but its the part after ⟹RD that differs from the standard encoding, which has the usual form (λx. Some [ ... ]). To understand what goes on in swapout_R rel (?S''Y'' ⊢ AgSS forwKS ?Ag''a'' (ActSS forwAS ?Act''beta'' ?S''X'')), let’s take a look at the signature of the function swapout_R:

Without going into details of what swapout_R does, notice that the partially applied function swapout_R rel (?S''Y'' ⊢ AgSS forwKS ?Ag''a'' (ActSS forwAS ?Act''beta'' ?S''X'')) will have the type signature Sequent ⇒ Sequent list option, which corresponds to the lambda function (λx. Some [ ... ]) (where ... is a list of sequents).
One can see that this function takes a sequent and either succeeds in deriving the premises (returns a Some (Sequent list)) or fails and returns None. In this rule, the swapout_R function supersedes the match and replace/replaceAll functions and is used instead, however match and replace/replaceAll are automatically used for all the other rules where they are sufficient. For details on how this works, have a look at the der function in the Calc_Rules.thy template.

The macro ‘rule’ is a special rule that gets added to any generated calculus by default. The motivation for the macro rule arises from the notion of derived rules in a calculus. Since derived rules can be used quite frequently, the Scala UI provides an easy way to create macros that can be applied in a similar fashion to the defined rules of the calculus. These macros represent snippets of proof tree skeletons where the sequents contain free variables to be substituted for by concrete terms, when applied.

In Isabelle, datatype Rules is mutually dependent on the datatype Prooftree, as a result of the definition of RuleMacro:

Due to the nature of the UI tools (namely that the proof tree generated by the tools must always be valid), these derived proof tree snippets have concrete terms substituted in, are checked for validity and added directly to the main proof tree. To remove clutter, the snippet of the proof tree is stored separate from the main proof tree structure. To demonstrate, let’s take a look at a derived rule in the D.EAK calculus, $W_R$:

Here X, Y and Z are variables that can be substituted by concrete terms. Often, the full proof tree won’t be written out and only the derived rule name label would be added to indicate that a derived rule was used:

The use of rule macro simulates this in the Scala UI, keeping the proof trees shorter and more readable: 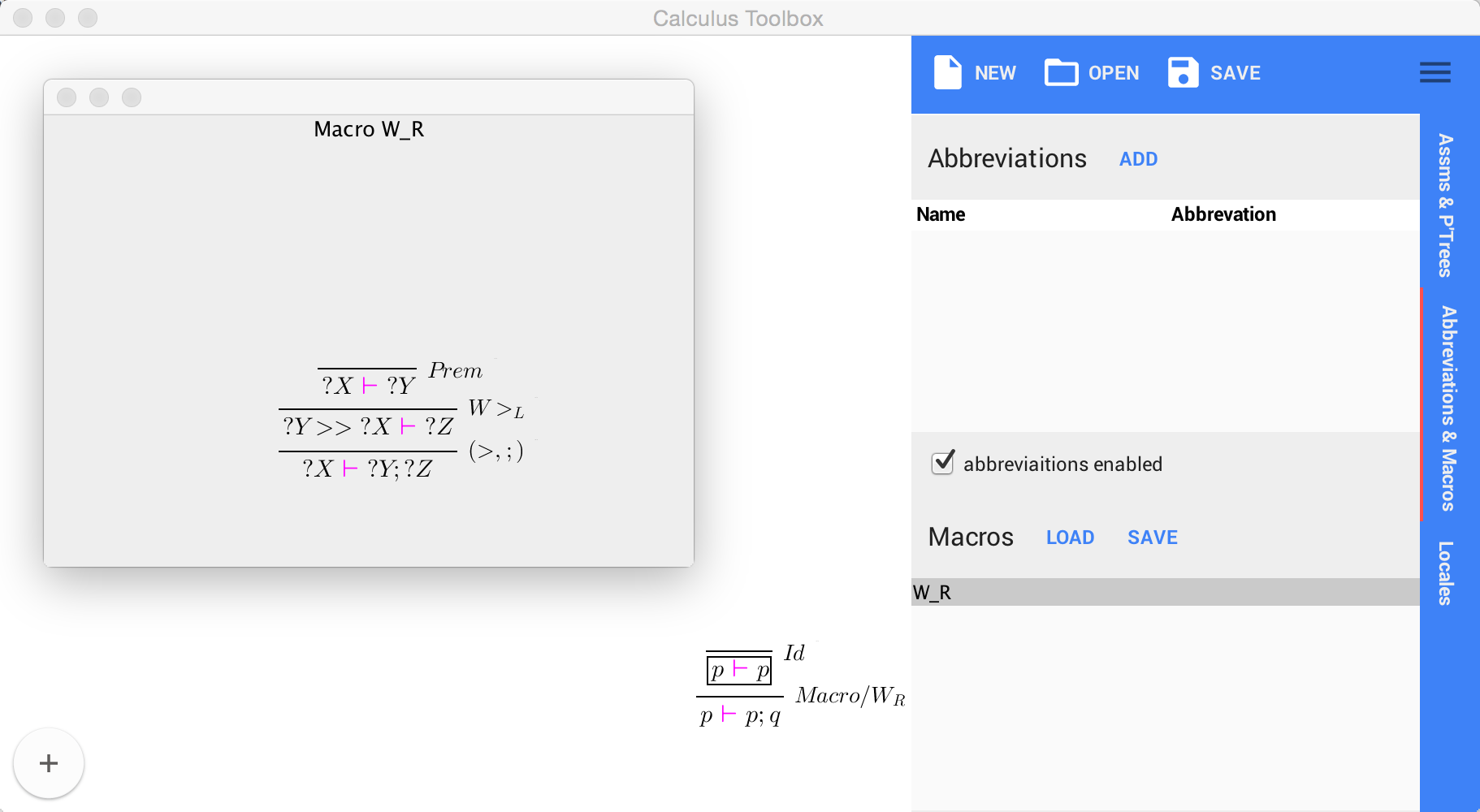 At the same time, the underlying encoding (ASCII and Isabelle) carries the macro proof tree within the the main proof tree, and this means that the main proof tree can be checked for validity without relying on any external definitions of derived rules. To learn how to define and use rule macros, have a look at the Scala UI documentation.